As Southampton Town expanded eastward in the 1670s, a new settlement was established. Commonly known as Bull’s Head, it was located at the important crossroads of the east/west East Hampton Path (now Montauk Highway) and the north/south Ocean Road and Sag Harbor Turnpike. Here the colonial Triangular Commons, the hamlet’s historic village green, was laid out.

Set out as a parade ground for militia training in the 17th and 18th centuries, the commons being centrally located, militia companies from East Hampton, Southampton, Sag Harbor, and Bridgehampton met here to practice drills.

The Town residents met here three times a year, armed and equipped as the law directed, to drill in military tactics. First, the officers had their training; a few days later those between 18 and 45 who were liable to military duty were called out and they had company training. Each man must have a flint lock musket that would strike fire, with a bayonet to fit it, and a cartridge box. Later they had general training, when the companies from Southampton, East Hampton, Sag Harbor, and Bridgehampton all met together.
(James Truslow Adams, Memorials of Old Bridgehampton, 1916, pg. 102)

After training, the men would enjoy an afternoon at the Bull’s Head Tavern (below) on the northeast corner of the commons, built by John Wick in 1686. 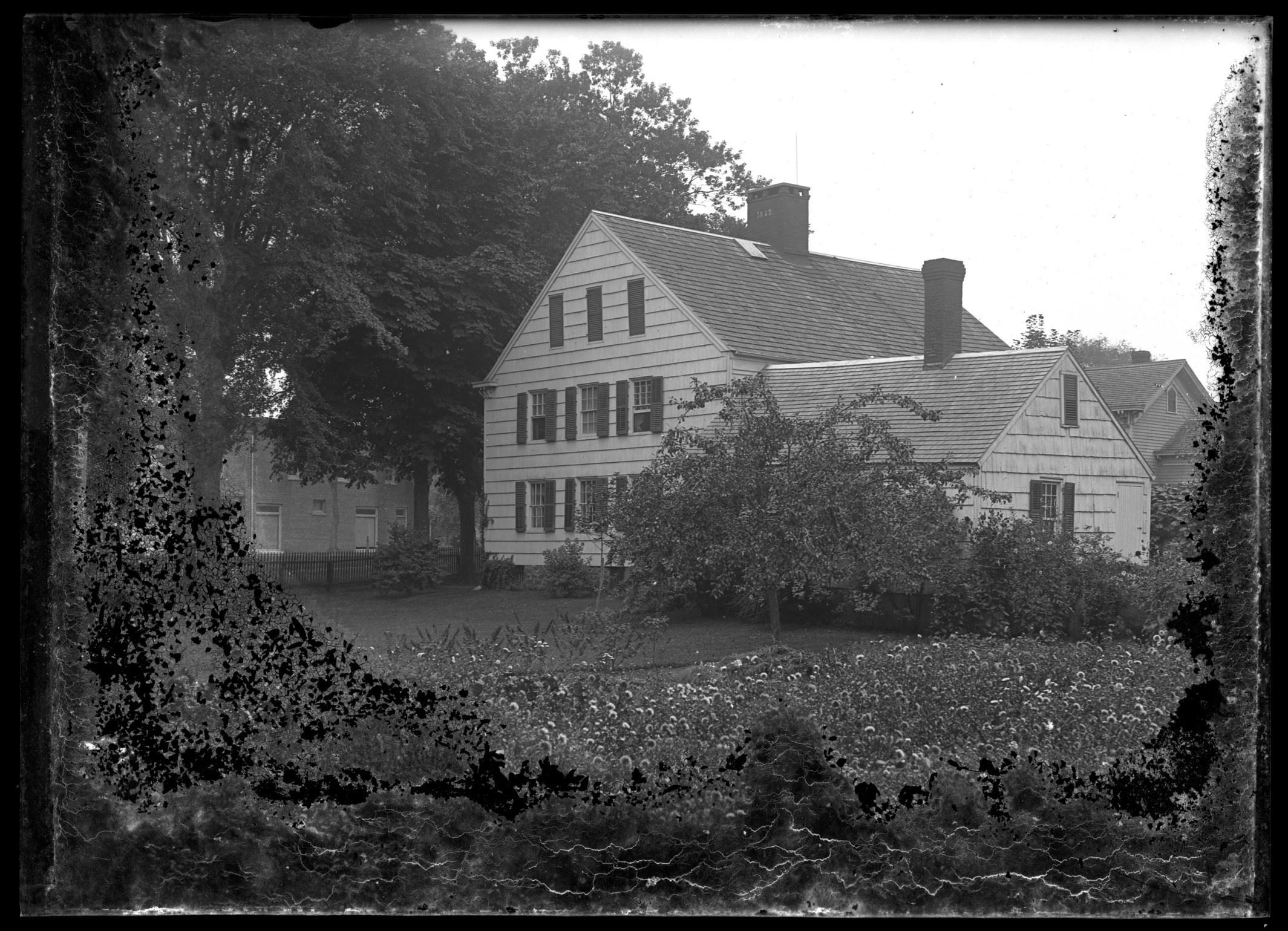 The house served as a tavern, inn, and stagecoach stop throughout the 18th and early 19th centuries, with various owners. In 1939, the property was sold to the Shell Oil Company and was torn down to make way for a gas station.

As reported in the Sag Harbor Express 166 years later, below are the local Muster Rolls for 1715. 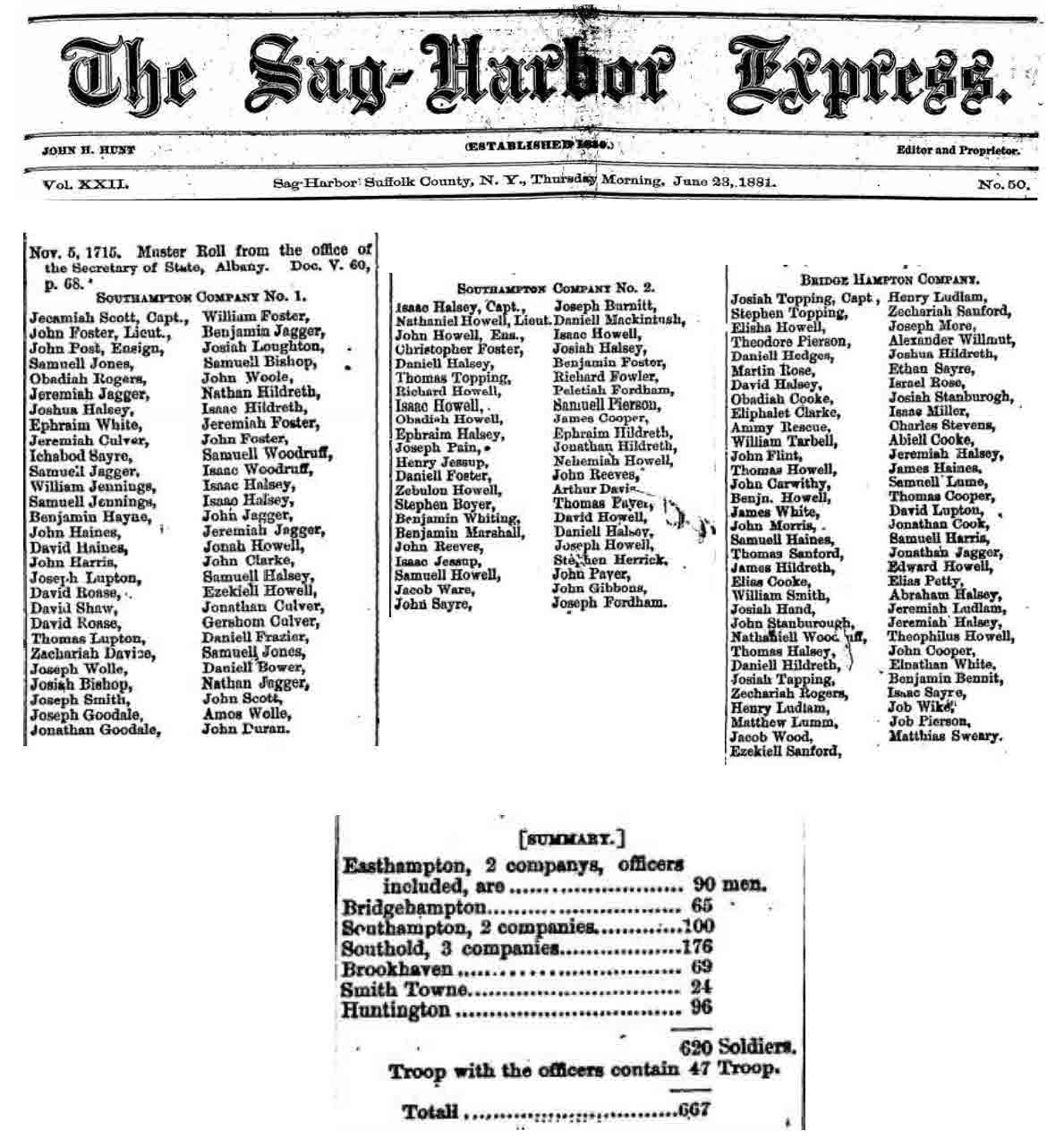 In 1706, Southampton Town granted local men the right to build a windmill on the commons, (Southampton Town Records, Book 2, pg. 144), one of the earliest built in the Town, and laid out the west end for a burying ground in 1714. Eventually the first schoolhouse, known as the Two-Chimney Schoolhouse, was erected in 1720.

Old Bridgehampton Cemetery, opened in 1714, view west toward the Presbyterian Church built in 1842. (Photo courtesy of the Bridgehampton Museum)

In 1900, at the age of 90, Clara Haines (1811-1906), after attending a religious service in the repurposed 1720 schoolhouse, described it as standing length-wise east to west, much longer than other local schools, with a large fireplace on either end, one door in the center of the south side, and one at the west end. The walls and ceiling were crudely finished, and the floor was either dirt or perhaps tanned animal hides or bark.
(William D. Halsey, Sketches from Local History, 1935, pg. 35) 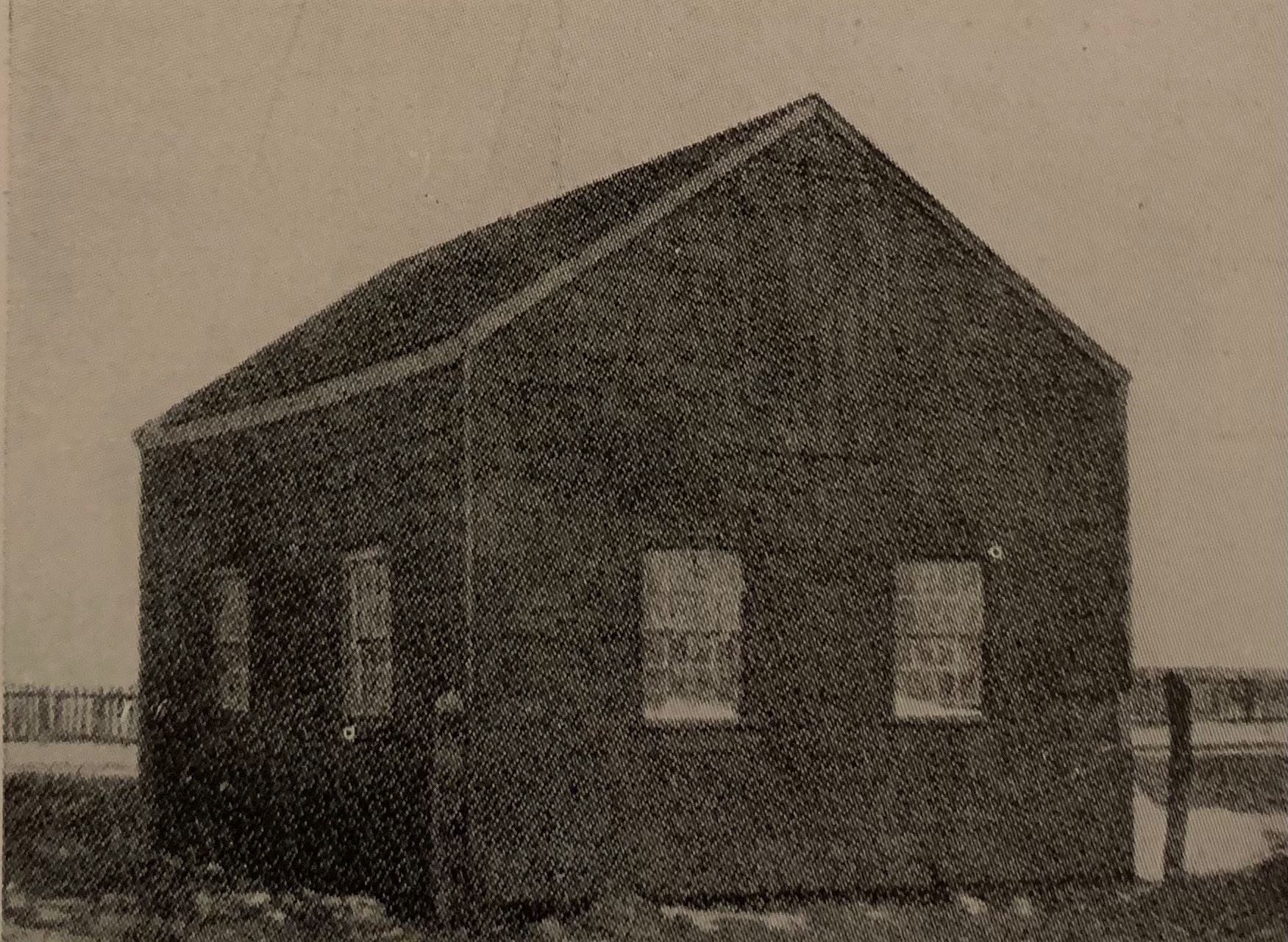 It wasn’t until 1812 that New York State proposed a legislative act to encourage the building of schools. Following this initiative, Abraham Rose, Rufus Foster, and William Herrick, school commissioners, met to lay out several school districts in the Town.

About this time, the second schoolhouse, at right, was built on the commons. It was used until c. 1842.

As reported in Greenleaf’s New-York Journal and Patriotic Register, below, a Liberty Tree was planted right on the commons on December 19, 1798. After the tree was in the ground, the celebrated song “Liberty Tree” (from a poem written by Thomas Paine in 1775) was sung, slightly altered to fit the times. A rally formed,  toasts were made, 16 in all, favoring Thomas Jefferson (who ultimately won the presidency in 1800), Republicanism, and our freedoms secured to us by the Constitution. It is said that Aaron Burr, who became Jefferson’s Vice President in 1800, was in the anti-Federalist audience, as was David Frothingham, the publisher of the Long Island Herald in Sag Harbor, Long Island’s first newspaper, from 1791 to 1798. 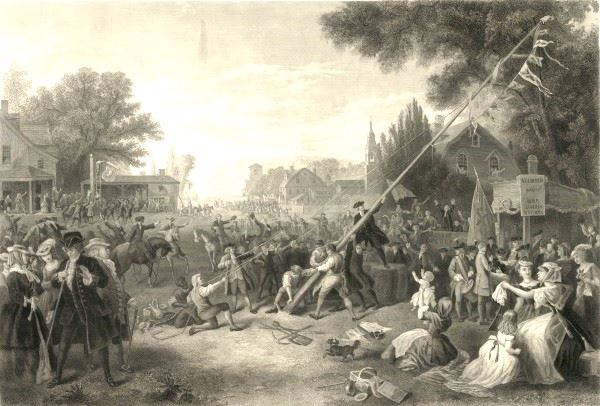 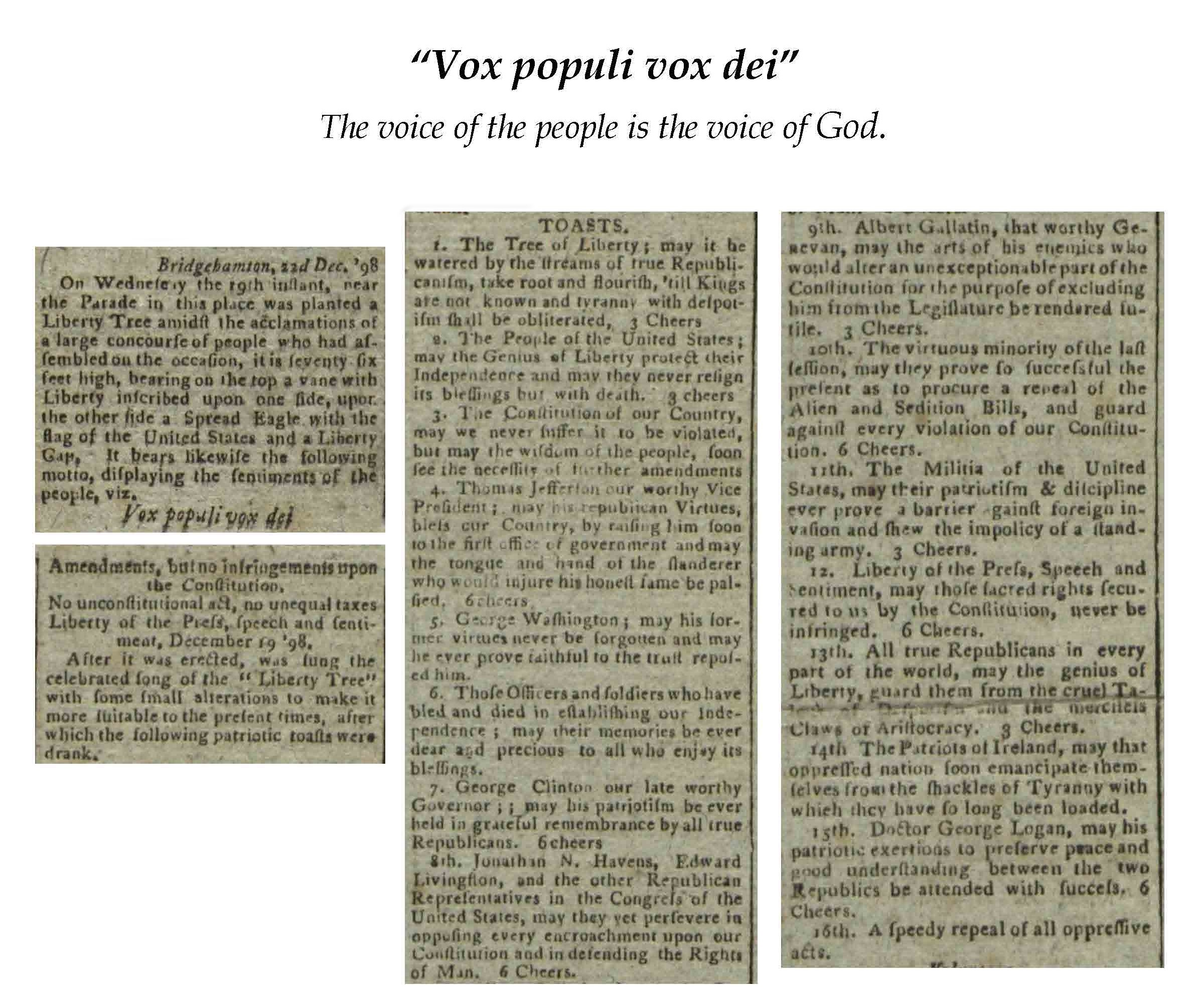 Triangular Commons –Into the 19th century 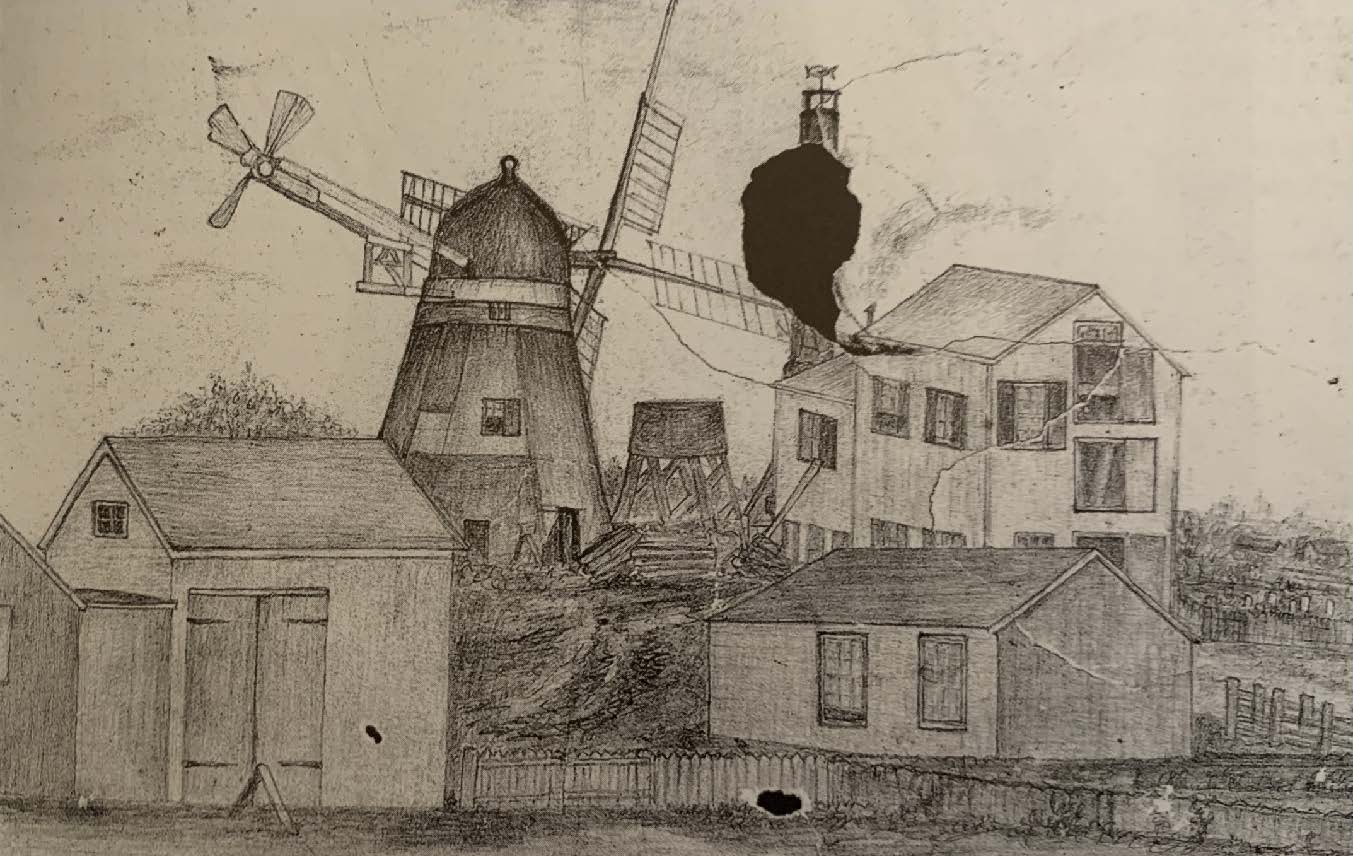 In 1836 the original 1706 windmill on the Triangular Commons was replaced by the Beebe Windmill, seen above in a sketch by Dr. John L. Gardiner of Bridgehampton. The small parcel where you are standing was saved in the 1980s and is all that is left of the commons, as more and more commercial, religious, and civic institutions moved in during the 19th century. 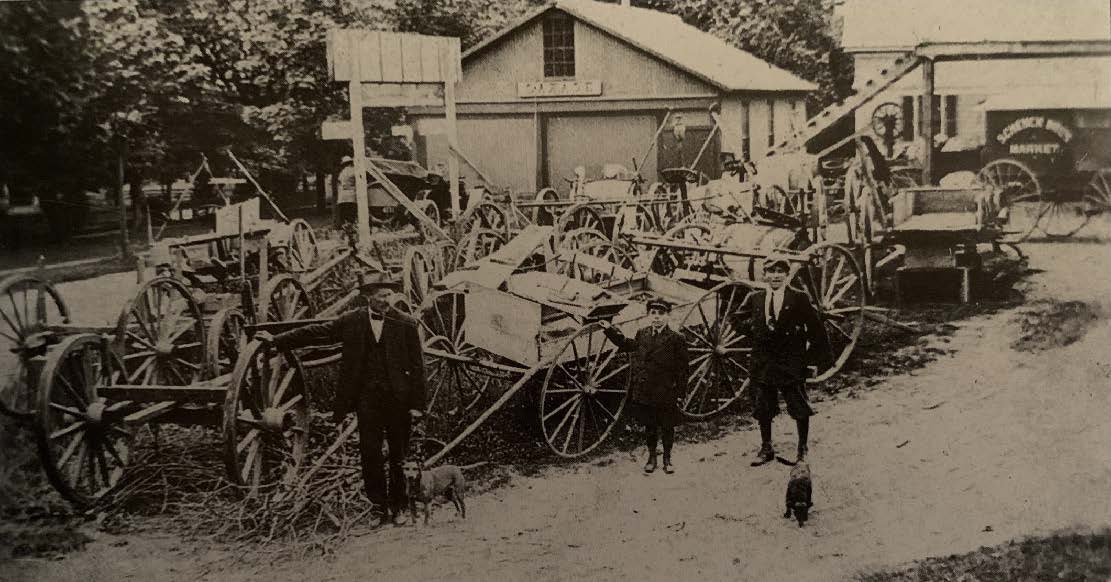 Halsey & McCaslin’s wheelwright business, above c. 1910, and James Haven’s blacksmith shop both operated on the southern end of the commons from the mid 19th century up until the automobile took over as the main mode of transportation.