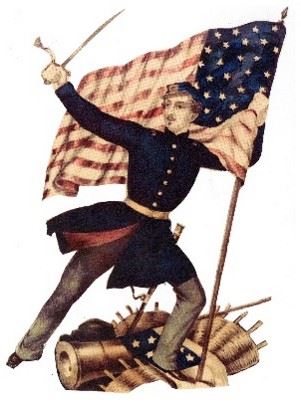 The Civil War (1861-1865), known as the War of the Rebellion, cost more American lives than all our nation’s other conflicts combined, about 620,000 men. The 500,000 New Yorkers who served, 53,000 of whom died, came from all walks of life – farmers, whalers, fishermen, merchants, citizens. Southampton, with an approximate population of 7,200 in 1860, sent 400 enlisted men, either volunteers or drafted, during the four-year campaign.

As a way to honor these brave and able men of Southampton who served, an enrollment record template (based on an actual Currier and Ives 1862 design) was created for each soldier. Town enlistment records, conscription records,* New York State Regiment Unit rosters, newspaper databases, and cemetery records were all pored over, checked and rechecked, to compile this database. This is a work in progress, there are bound to be errors and omissions, but as more information comes to light, it will be added. For the sake of not leaving any man out, some included might actually be residents of East Hampton or Brookhaven, or are just buried in the Town and not native to Southampton.

* As morale was low in the North, finding young men to volunteer was a challenge for the Union Army. The Conscription Act of 1863 was passed, establishing the first national draft system. This required registration by every male citizen and immigrant who had applied for citizenship between the ages of 20 and 45 (source: United States Senate). With a lack of local men enlisting of their own volition, Southampton Town, in order to fulfill their draft quota, facilitated bonds to hire substitutes for draft eligible Southampton men.

Please contact Julie Greene, Town Historian, in the Town Clerk’s Historic Division, at jgreene@southamptontownny.gov or 631-702-2406, if you have questions or further information.